Today marks the 10-year anniversary of the S&P 500’s bottom during the global financial crisis. The 2008 Financial Crisis may still be fresh in many people's minds and therefore seem like it was only yesterday. From its pre-crisis record close of 1565.15 on October 9, 2007, the S&P 500 declined nearly 57% to its March 9, 2009 closing level of 676.53! The savings of millions of households were decimated in the process and the ramifications of which were exacerbated by the collapse of housing prices and the highest levels of U.S. unemployment in nearly 30 years. 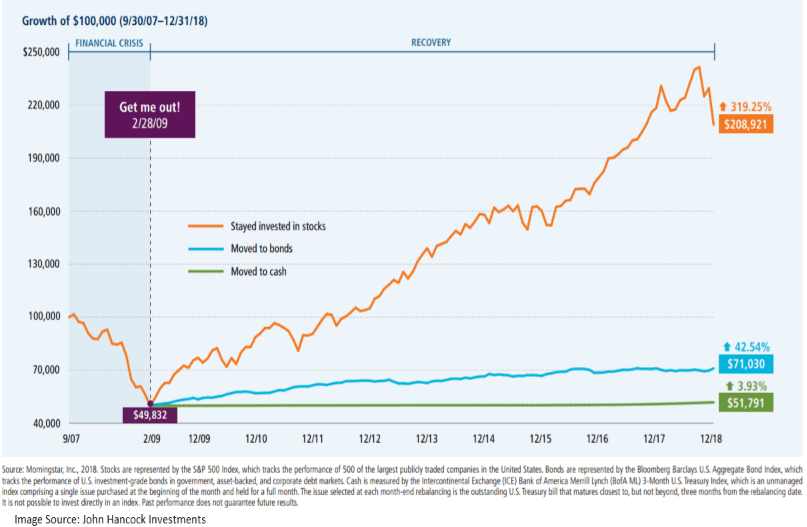 The above chart depicts what would have happened to a $100,000 investment in the S&P 500 that was made on September 30, 2007 - right before the market's high point. You then see how that investment was cut in half by the end of February 2009. What transpires next depends on how you would have reacted to this rather swift market plunge. If you had headed Jim Cramer's advice and moved to cash, your investment would be worth just under $52,000 on December 31, 2018. If instead, you moved your investment dollars to bonds, your investment would be worth just over $71,000 at the end of 2018. Both of those decisions would leave your portfolio well below your initial $100,000 investment.

Contrast that with the investor who ignored the urge to sell their S&P 500 investment in a panic and instead held on to their investment through this financial crisis. Their portfolio would have been worth over $208,000 at the end of 2018! Granted, with the benefit of hindsight, it’s easy to see the immense benefit of such a decision. However, at that time, there was a very real feeling among many people that the sky was indeed falling. Depending on where you were in life during this period, you may or may not have an appreciation for the pervasive fear that existed from Main Street to Wall Street. There were a number of events surrounding the financial crisis that had never occurred and/or were believed to be “impossible”. For example, the fall of Lehman Brothers and the nationwide collapse of home prices, which led to speculation that the global economy could collapse.

Even after the US equity market had hit what we now know was its bottom in 2009, there was still no shortage of headlines that would have given all but the most steely, disciplined investors qualms about deploying capital into the market. An April 3, 2009 New York Times headline read, “663,000 Jobs Lost in March; Total Tops 5 Million.” Chrysler filed for bankruptcy on April 30th, followed by General Motors in early June. All of this to say, that even as the recovery of the US equity market was underway, there were still plenty of reasons to be skeptical that the worst was over.

On October 6, 2008 the S&P 500 was already down more than 32% from its 2007 peak. That morning on NBC's TODAY show, Jim Cramer was frantically heard saying, “Whatever money you may need for the next five years, please take it out of the stock market right now, this week. I do not believe that you should risk those assets in the stock market right now.” While I have no way of knowing how many people actually followed Mr. Cramer’s advice that day, I do know that many investors threw in the towel sometime during the financial crisis and some became so fearful that they never reentered the stock market. That action alone has had devastating consequences to the financial wealth of many investors.

I recently discovered the chart below and boy was it an eye opener. This one picture sums up the negative impact of not having faith in your investment plan and abandoning it when the talking heads on TV tell you that; "The end is near!" "This time it's different!" "Sell everything and move to cash until the dust settles." 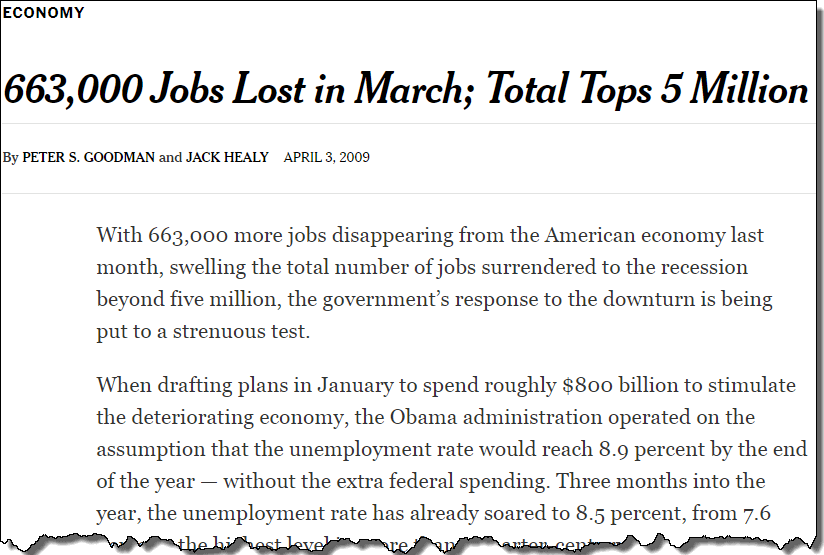 As the chart above shows, an equally important part of this equation is having a plan for re-entering the market. In an environment like the one that existed in 2009, making the call to get back in may be the part that requires more intestinal fortitude and why you need to have your plan for both halves of the equation worked out well in advance. As we’ve seen, only having a risk-off plan (ie. moving to cash or bonds) will probably be worse in the long-term than having no plan at all. Many investors become paralyzed by a rising market. They think, "Wow! The market has risen pretty quickly. I better not get back in now because it will probably fall from here." Then the market falls a little and they feel vindicated. Unfortunately, this cycle repeats itself over and over again all the while they are on the sidelines while the market trudges higher.

It's human nature to get nervous when your portfolio plunges quickly. Loss aversion (it hurts twice as much to lose a dollar as gain a dollar) is hardwired into human psychology. But history has proven there are three things all investors must do in order to use the incredible wealth compounding power of the market to achieve their financial dreams. The first is not to panic, and remember that corrections are normal, healthy parts of market cycles. They are usually over quickly and don't stop the market from rising in nearly 75% of all years.

By far the most important thing investors can do is stick to a smart, long-term investing strategy that was developed before stocks start dropping. This strategy needs to factor in your risk profile, time horizon, goals, and thus develop an asset allocation that works best for you. It's that asset allocation and portfolio construction, not market timing (which history shows is essentially impossible to do), that will ensure your wealth is protected during corrections and bear markets. So, avoid market timing like the plague, no matter how tempting it may seem or how confident some analyst or economist is in his/her short-term predictions. If someone had a system for perfectly identifying market tops and bottoms, they would be a fool to share it. It would be like giving away a treasure map.

Finally, remember that market volatility has a major silver lining. That would be the opportunity to buy great companies at bargain prices. Even deeply undervalued stocks can fall further.

It is important to remember that a prudent investment plan is like the navigation system in your car. It provides a route to get you to your destination with as few detours as possible. However, you may find the first route it suggests isn’t necessarily optimal for you. If you’re a right-lane-of-the-highway, cruise-control-set-to-60 type of driver, then a route that has you zipping through city streets may not be the best route for you, even if it would get you to your destination five minutes sooner. The point is, the best navigation system or investment plan is the one that gets you to your destination and does so by providing a route that you will follow. After all, you’ll arrive at your destination much later if you abandon your aggressive through-the-city route halfway through than if you had just taken the slightly longer highway path in the first place.