It's hard to believe that it has been a little over four months since Christmas and the now infamous “Christmas Eve Massacre” when the S&P 500 lost 2.7% in one day! This decline capped off the 4th quarter sell-off, which saw the major US stock indices drop by about 20%. Things looked rather bleak at that moment. As the new year began, no one I am aware of was predicting that the S&P 500 would be within 1% of hitting a new all-time high by the end of April, yet that’s exactly where we find ourselves today.

Of course, the next "Big Scary Thing" is always right around the corner. Think back to the fears that were cited as the cause of the 4th quarter selloff; a global economic slowdown was coming, the Federal Reserve was raising rates too aggressively, and there was an impending U.S.-China trade war. Guess what? Those fears have now subsided and they have been replaced with headlines telling us what we should fear next. This is not too shocking. The financial news industry will always be constructing billboards with 10 foot tall, bold-faced type to highlight any potential bump in the road. After all, they earn a living by selling magazines and generating clicks. Think about it. No one would want to read an article titled “Everything’s Fine”. The old newsroom adage, “If it bleeds, it leads.” didn’t come into being by accident. Now that we are approaching all-time highs for the major US stock indices, the headline du jour appears to be - "Stocks Are Overvalued".

That headline could be right. But it also might be wrong. The point is that we can't try to adjust for every headline or potential bump in the road. It is important to remember that prudently constructed investment portfolios are not affected by headlines over the long-term. As surely as you can rely on the sun rising tomorrow, you can rely on the financial media to be hyping the next "Big Scary Thing". You can also rely on the fact that they are often going to be wrong. And even when the "Big Scary Thing" does happen, the consequences are usually not as dire as was predicted. Take a look at the image below which shows some of the "Big Scary Things" over the last ten years against the backdrop of the Dow Jones Industrial Average (DJIA) price chart. 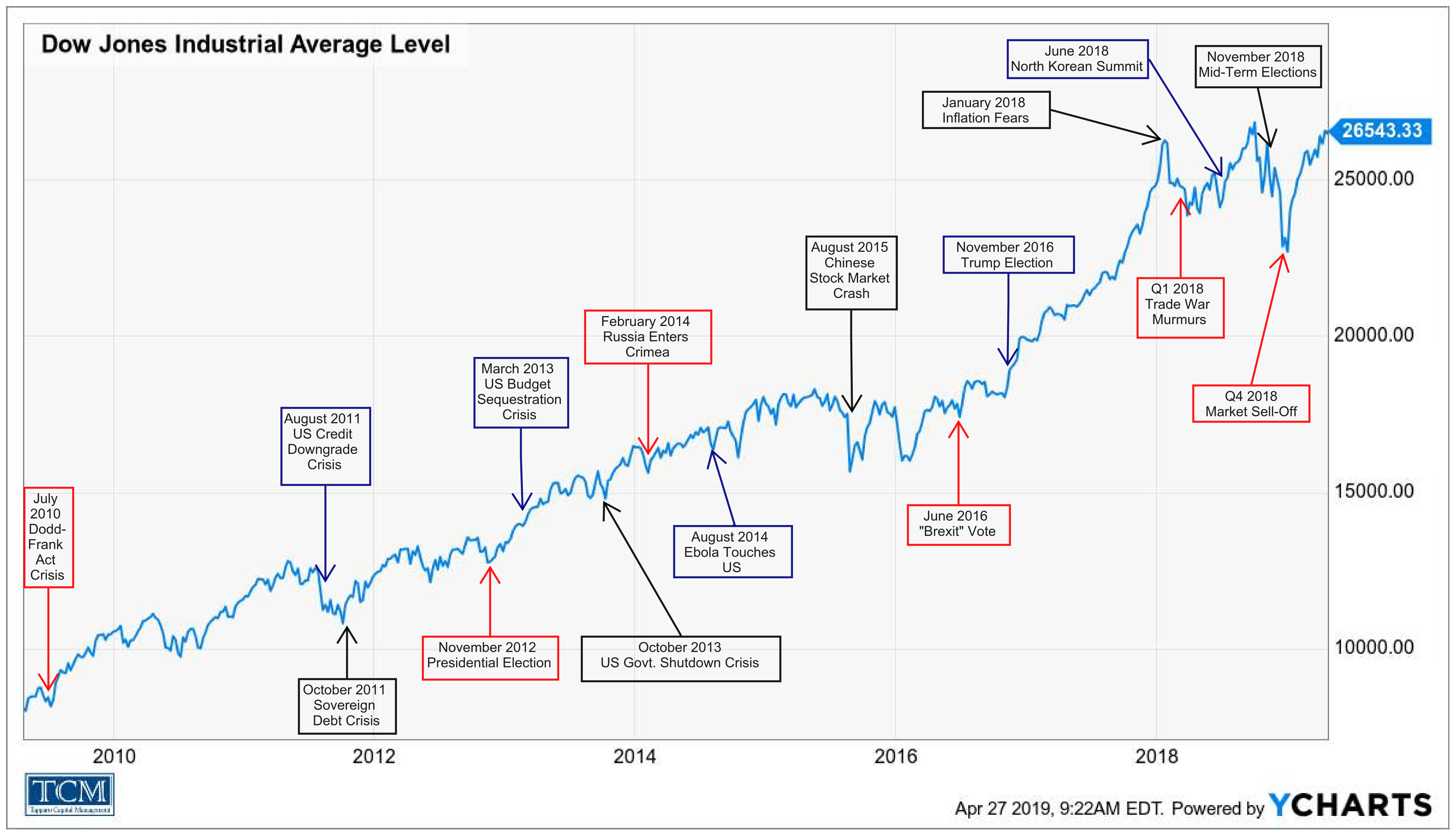 As the chart shows, several "Big Scary Things" during this time period had little or no effect on the stock market - the DJIA didn't even blink during the March 2013 US Budget Sequestration Crisis. In June 2016, the financial media trumpeted the "Brexit" vote in Great Britain as the next "Big Scary Thing". Yawn. The DJIA recovered within a month after Britain voted to leave the European Union. The largest draw-down experienced during this time period was during the August 2015 Chinese Stock Market Crash. But looking back on it now, we can see that the DJIA was back near its May 2015 high by the beginning of November.

If you had hibernated in a cave from last September until this week, you would have missed a pretty extreme down-and-up ride in the stock market. But, if you judged the market's action by the value when you entered the cave for your nap and the value when you awoke, it would look like you had missed one of the most uneventful six months in the history of US stock market. We certainly know that this was not the case!

The point here is not that bad things or bear markets can't happen or that we would be better off utilizing a pure buy-and-hold strategy. No. The point is that the headlines are not a good barometer for the future value of your investments. Instead, having an objective rules-based system that can help you avoid falling prey to the noise, while remaining vigilant to the real signals that the market, not the media, are giving you will lead to longer term success. Please come back to the above image the next time you see or hear a "Big Scary Thing" headline. This one simple chart will provide you with a simple visual to demonstrate how overblown most of the so-called crises really are. One of the cardinal sins in investing is letting your emotions take over. The rules-based system that I employ to manage investments tells me what the market, not a financial talking head, is saying. It lets me know when it's time to alter our asset allocation or raise cash in a portfolio.

Do you have questions about the stock market? Maybe you want to chat about your own personal finances? Whatever it may be, we are here to help. Please feel free to reach out!