October is right around the corner. It's a time for World Series baseball, pumpkins, brilliant foliage, and stock market crashes. Wait? Stock market crashes? That's right. Some of the most notable stock market meltdowns have occurred, or escalated, in the month of October. These include 1978 (-9%), 1987 (-22%), and most recently, 2008 (-17%). October has also produced several of the largest one-day market declines. Black Monday (1987) and Black Tuesday (1929) both occurred in October.

Now I am not pointing this fact out to alarm you. Quite the contrary. I just want to put the current market environment into context for you, because I am sure that we will be inundated with a myriad of media reports about the coming stock market correction. You know, the one that is coming just because this bull market has been going on for so long now. Do not pay attention to those kind of stories!

Here's today's fun fact: Did you know that since 1950 the S&P 500 has had more double-digit gains in October than it has had double-digit losses? It's a fact. The month of October is also known as the "bear killer" because it marks the end of the seasonally weak period in the market. Historically speaking, October has been a positive month more often than it has not. The S&P 500 has actually finished higher in 60% of the Octobers between 1950 and 2017.

So while October may have a notoriously bad reputation, the histogram below shows us that maybe it is not well deserved. Each of the previous sixty-eight Octobers' returns have been placed into a performance bracket, allowing us not only to see that there have been more up Octobers than down Octobers, but also the degree to which they have been up or down. When you look at the far left of the histogram, you will notice that only four Octobers since 1950 have experienced a decline in excess of -5%. The most common experience in October has been a gain in the range of 2.5% - 5%. 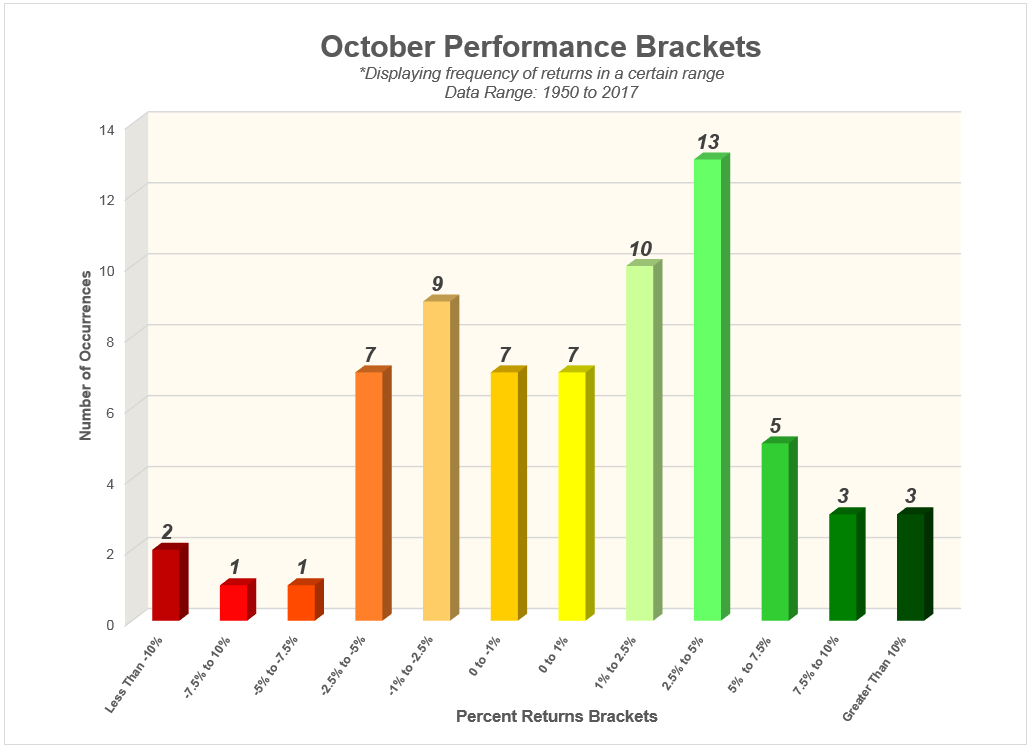 While this is an interesting exercise to demonstrate what has happened in the past, it really does not tell us much about October 2018. What I do know is that currently my U.S. stock market indicators remain positive. U.S. Equities remain the top ranked asset class out of the six that I follow on a daily basis. There certainly could be some short-term market volatility as corporate earnings season will begin again in the next month or so. Also, increasing trade tensions and rising interest rates could impact market volatility. I remain vigilant and if US Equities begin to deteriorate relative to the other asset classes, portfolio allocations will be adjusted accordingly.

In the meantime, don't be spooked by dire warnings about the month of October and what it might mean for your investments. If the past is any indicator, then things will be OK.