The calendar has turned to May. The April showers that were supposed to bring May flowers, have only brought more rain here instead. I am confident that the flowers will be here soon enough.

There is an old adage in the stock market - "Sell in May and go away." This saying came into being due to the fact that the period from May through October is notorious for being the seasonally weak six months of the year for the stock market. So as you can correctly infer, we have just completed the seasonally strong period for the market which ran from the close on October 31, 2018 through close of April 30, 2018. During this recent six months, the Dow Jones Industrial Average (DJIA) had a return of 5.88%. This gain does not even provide a hint to the amount of market turmoil that we experienced during this past seasonally strong period. I have to say that during 2018's fourth quarter the market felt anything but strong!

May through November Weak in the Stock Market

So, why is May through November considered a weak period in the market? According to the Stock Trader's Almanac, the market performs far better during the November through April time period than it does from May through October. For the period from 1950 through 2018, the DJIA had a compound average annual return of 7.24%. If you only considered the seasonally strong periods of November through April in this time period, the compound average annual return was 7.02%. The seasonally weak periods (May through October) during that same time period had a compound average annual return of only 0.22%! I find these numbers to be interesting, but it is not a prudent way to manage your portfolio. Looking back at history, there have been down periods during the seasonally strong period, and there have been up periods during the seasonally weak period. Yes, there is a strong historical bias present here, but it is not a "be all, end all" means of portfolio risk management. We just should be aware of this simple historical tendency.

Let's consider the chart below. While this old stock market adage about selling your stocks at the close of April and then buying them back at the start of November may have once made some sense, things look a little different in the more recent past. 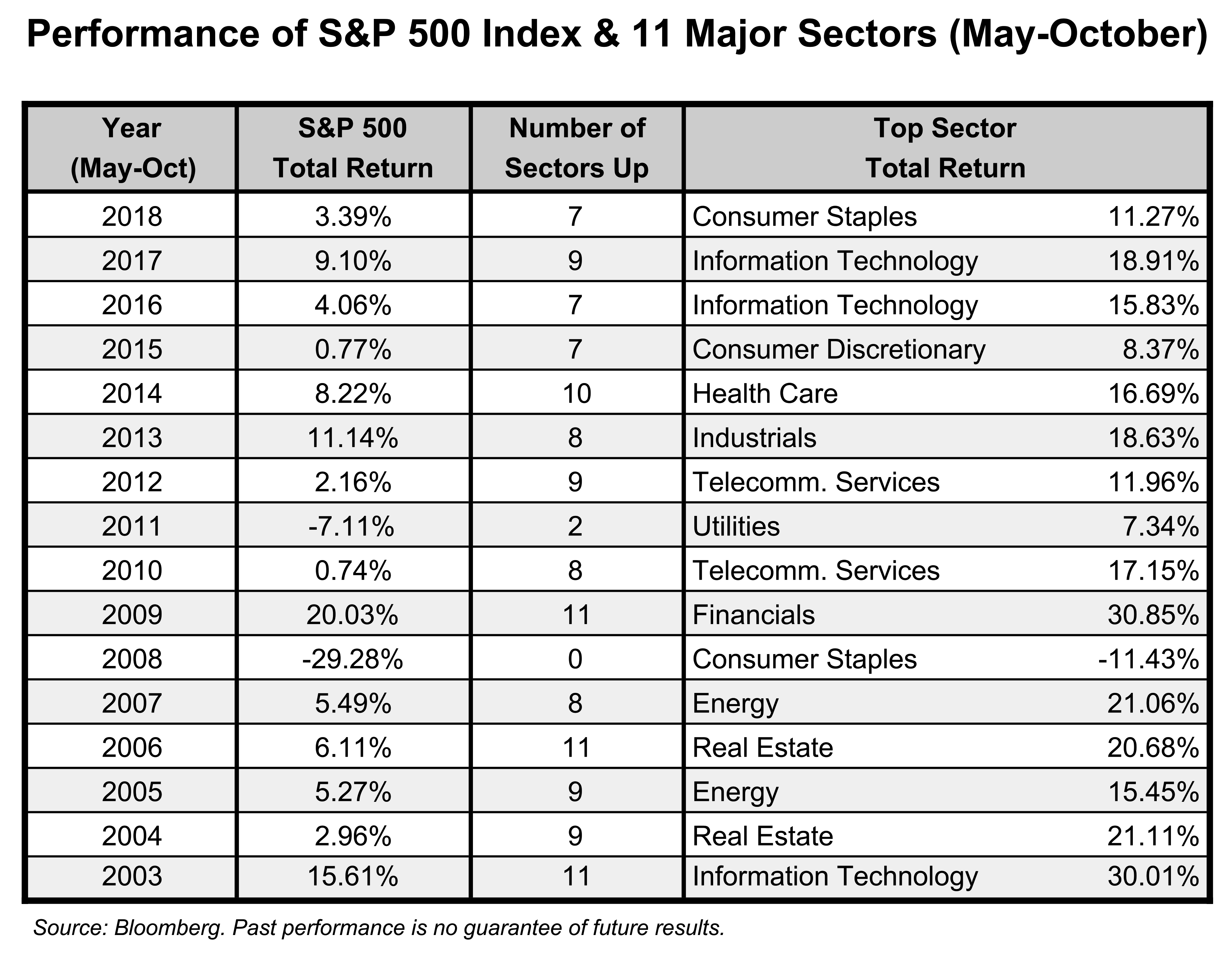 As you can see above, with the exception of 2008 and 2011, each of the weak periods had a positive return. So why aren't there more negative returns over the last sixteen years? One reason could be that the U.S. economy is less industrialized now than it was in the past. When the U.S. was more of an industrialized economy it was not uncommon for plants and factories to close for a month or longer in the summer to retool and allow employees to vacation. The theory was that companies would conduct less commerce in that six-month span, which would likely translate into lower earnings. Fast forward to today. Due in large part to globalization, the world is far more interconnected and competitive, and there is less room for downtime in company operations. Companies do not want to be left behind. Shutting down for the summer months is just not practical any longer.

While the average total return for the S&P 500 for the May-October periods in the above table was only 3.67%, it is far from a return that would be utterly disappointing. Couple that with the fact that thirteen of the sixteen top-performing sectors in the table posted total returns in excess of 10.00% during the May-October time period, and you have the potential for some decent returns. Certainly returns that you would not want to "Go away" from.

What Does This Mean For You?

So, while certain market adages may have had some truth in the past, managing your portfolio by blindly following them is not a prudent course of action. As we head into the month of May 2019, I continue to see positive signs across the U.S. equity market from the overall trend of the major indices to U.S. Equities continuing to be the strongest major asset class of the six that I analyze on a daily basis. So, while some may say that we are now entering the seasonally weak period in the market, it is definitely not the time to abandon ship.

Do you have any additional questions about the stock market or your finances in general? We would love to speak with you! Please feel free to reach out.