Well, the so-called "experts" got it wrong again. Voters in the United Kingdom didn't do what they were expected to do. Instead, they voted decisively on Thursday to leave the European Union. They favored Brexit over remaining in the EU by an unexpectedly high margin of almost 4%. As expected, markets around the world are reacting negatively. As of this writing, the major U.S. indexes are down between two and three percent. Please do not panic. And here's why.

Polls showed that there were three main issues that drove the vote to exit.

It appears that the UK's decision to leave the EU will have little long-term effects on the UK or EU economies. Today's market volatility is the immediate reaction to the current uncertainty that the world's market must absorb. This volatility often causes short-term mispricings that should be viewed as an opportunity to find some bargains amongst the stronger companies.

In reality, the UK represents approximately 25% of all business trade within the EU and runs consistent trade deficits with the rest of Europe. The rest of the EU needs the UK and will beat a path to its door to sign new trade agreements with them. If they don't? They will lose a major trade partner. There really is no way that any EU country will allow one of its biggest export markets to go away.

Nothing is going to fundamentally change by tomorrow, by next month, or even by next year. There is even some good economic news in yesterday's vote. The US and the UK have been trying to sign a major free trade agreement, but the EU has been blocking this effort. It now looks like that impediment has been removed. We may see more of this from other non-EU countries.

To sum this all up, Brexit really is a political issue and not a fundamental business or economic issue - despite what the press may be telling you. Yes, stock markets hate uncertainty and this uncertainty will cause days like today in the short-term. But like most political events, the long-term impact to the markets should be minimal. A prudent, diversified portfolio is your best long-term weapon against days like today. Stay focused on your goals and not on the news. In the long run it is just noise which is trying to distract you. Ignore it. Instead, think of this famous British poster from the World War II era. 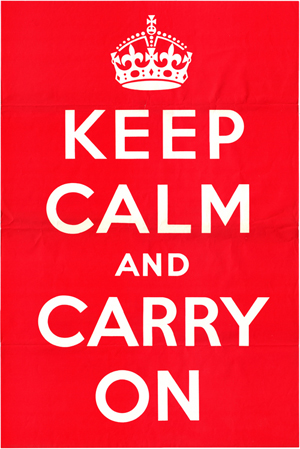