With Friday's close, the S&P 500 Index is 9.3% off of its closing high that was set on September 20, 2018. We are almost at a 10% correction in the S&P 500. What is interesting is that the index has fallen almost 10%, but the average S&P 500 stock has fallen over 16% and the average Top 1000 largest stock has fallen over 18%. If we do see the S&P 500 fall further, it will be the second time in 2018 that the market has fallen more than 10%. While this most recent pullback has been relatively swift, it is not an uncommon occurrence, especially in bull markets.

The following graphic is one of my favorites, as it sums up our expectations and experiences pretty well. We envision our investment plan to resemble the smooth uphill journey in the upper panel. While in reality, the lower panel resembles our actual journey. We will reach our destination, but there will certainly be "bumps" along the way. October 2018 is clearly represented below. While things seem "scary" right now, the prudent thing to do is stay the course. 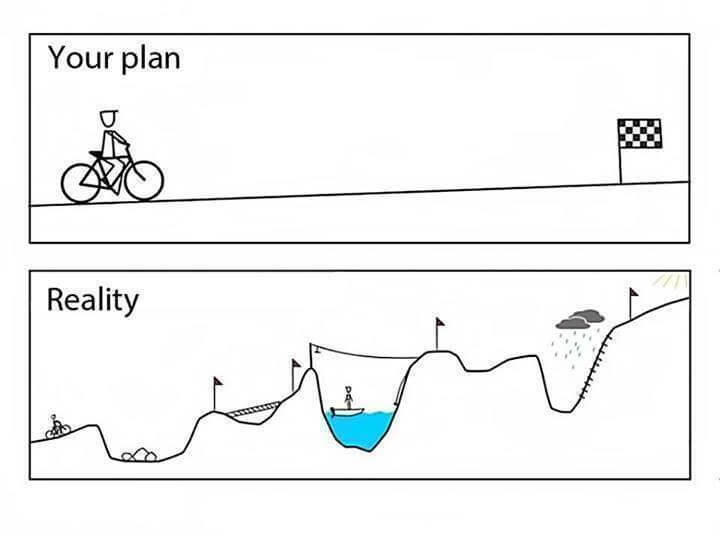 Another parallel to 1994 is that the Federal Reserve sharply raised interest rates, through six rate increases. The Federal Funds rate actually doubled in 12 months. The past couple of years have seen a steady rise in interest rates as well, with three increases taking place in 2018. That being said, the interest rate headwinds made it difficult for bond investors in 1994, as well as 2018. The Aggregate Bond Index ETF's (AGG) total return was down 2.92% in 1994 and currently it's down 2.07% in 2018.

As Mark Twain famously once said, "History doesn't repeat itself, but it often rhymes." So while every year is different, there are some parallels between today and previous years. Of course, things could turn out differently this time and instead of a 1995 style rally, things could look a lot like the early 2000's or 2011. For now, I will continue to pay attention to my indicators and follow the discipline that has served me well in the past.

Typically, pullbacks during bull markets tend to be viewed as buying opportunities as opposed to wholesale shifts towards defensive asset classes. Some pullbacks were steeper than others, but the bull market remained intact until the end of 1999. The structural bear or fair market of the 2000's looked much different in terms of the number of pullbacks and the magnitude of those pullbacks. For example, while the S&P 500 pulled back 5% or more 24 times in the 90's, in the decade of the 2000's, the market pulled back 5% or more 47 times and 20 of those times resulted in double-digit declines.

Prudent investment portfolios are constructed with the knowledge that there will be corrections or "scary" times in the market. Market history, as well as our own experiences tell us that. A diversified portfolio expects to experience "scary" markets. We don't know when or why these corrections will happen. Just that they will. Since weeks like these last few are to be expected, your portfolio should not be changed because of short-term market fluctuations. Investment portfolios are not designed to avoid all volatility and drawdowns. If they were, the portfolio would experience very minimal upside. Short-term volatility is the admission price for higher expected returns. As an example, your savings account at the local bank avoids all volatility. It also avoids providing you with a high return. It is important to remember that while short term volatility is uncomfortable and cannot be eliminated, the long term probabilities are skewed heavily in your favor. (see the chart above) Keep a long-term perspective, because months like October will try to knock you off of your game.